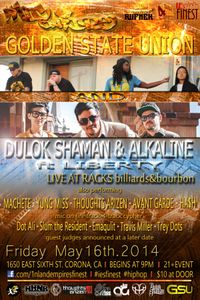 In his own words: "If I had to describe my style, I would call it channeling spirits. I just open my mind and let go whatever happens to stumble across it. I get a soul tingle when I freestyle, and great invigoration when I play on stage. I do music because its something I just couldn't get out in any other way. For my physical I have Jiu-Jitsu, and for my mind I have books and constant education, and for spirit I have rapping and music. I really wouldn't have it any other way."